All articles tagged with "Foot Licking"

Mistress Letta does not forgive easily. She believes in choices having consequences and punishing someone for the mistake they have done. She believes that forgiving leads to someone getting used to making the same mistake. So she punished her slave when he forgot to do a chore she had given him. She made him lick her dirty bare feet. She warned him not to do it again as the punishment would be worse.

Mistress Petra discovered that her slave had been lying to her and she had warned him never to lie to her. She was pissed about it and she humiliated him as punishment. She got him off his chair and she forced him to lick and rub her feet. She told him that was a warning and that if he lied to her again, he would only have himself to blame for what would happen to him.

Princess Serena gets slave to lick her feet

Princess Serena did not have a problem with her slave. But she had to humiliate him for fun. She had always wanted to try foot licking so she did that at the expense of her slave. She got him to lick his feet after she had spat on them. She made it worth his while though because for the first time, she got him to see her in a thong and he admired her sexy ass.

Mistress BlackDiamoond and mistress Amy wanted a new slave. They held auditions for them and this guy came out on top. But before they gave him the job, they had to first of all test him. The test was cruel and involved forcing him to lick their shoes and trampled him using heels plus doing a lot of other inhumane things to him. He endured all they threw at him and he got the job.

Mistresses show slave why he should obey them

Madame Marissa and her friend madame Madison wanted to teach this slave a lesson. They wanted to make him understand that they do not like to micromanage a slave but expect him to do everything the way he was told. They punished him to show him what they would do to him if he did not do what they told him. He was forced to lick dirty boots and eat food which had been crushed from their dirty soles.

Madame Marissa puts a leash on her slave to let him know where he stands. Then she takes off her smelly black sneakers and sticks his nose in them. He tries to get away but he can't with Madame Marissa holding the leash. Then it's time for him to experience her socks. She sticks one of them right on his mouth. Then finally he's forced to taste her sweaty goddess feet.

Mistresses punish guy for playing them

Madame Marissa and her friend found out that they were seeing the same guy. They were mad but instead of tearing into each other, they realized they had a common enemy and had to deal with him. Marissa called him to her house and when he came, he found the two of them. They punished him cruelly by trampling him and making him smell and lick their feet and socks.

2 Girls and Their Female Footlicker

Miss Nikki and her sister Miss Vikki got a cute slave girl they could dominate any time they wanted. They got this cute girl to sit at their feet while they relax and take turns sticking their dirty bare feet into her mouth. The young slave girl licks their shoes and takes them off so she can put their entire stinky bare feet into her mouth. It's so fun to watch females dominating females.

Mistress Katja has bound her slave so that he can't move or resist. Now it's time for him to lick the dirt from her bare feet. First she has him such dirt from every inch of the soles. Then she laughs as her slave tries to please her by sucking her big toe. She's so amused at his humiliation and will do anything she likes to her slave.

Mistress Megan and Mistress Xana are sitting down in their chairs as they have a sick foot smelling pervert trapped in the corner naked from the waist down. They begin ballbusting as he begs them to stop they laugh in his face humiliating him as they call him worthless and pig. These foot femdoms love trampling his cock with their dirty bare feet causing as much pain possible to teach him a lesson. 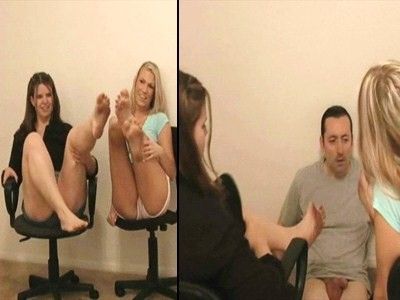